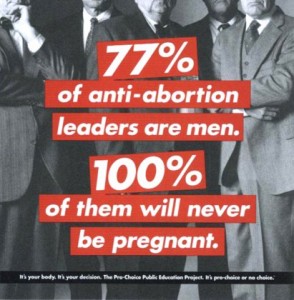 1970 was the dawn of a decade of radical and swift change for women in the U.S., none more profound than the right to control whether and when to become a mother. That year, a Texas woman named Norma McCorvey—a poor former carny with addiction problems and two previous pregnancies (one daughter forcibly taken from her by her mother, the other placed for adoption)—found herself pregnant a third time. Desperate and searching for an illegal abortion, she was eventually introduced to Linda Coffee and Sarah Weddington, two young Dallas lawyers looking for a plaintiff in a lawsuit to challenge Texas’s anti-abortion laws. They convinced Ms. McCorvey to become Jane Roe, the plaintiff. In March, 1970, they filed suit against Henry Wade, the district attorney of Dallas County at the time.  (Photo credit: Barbara Kruger)

In 1973, Weddington became the youngest person (she was 26) to argue a case before the Supreme Court. The Court decided in favor of Roe, 7 to 2, writing that the right to privacy implied in the Due Process clause of the 14th Amendment meant that a decision about pregnancy was to be made by the pregnant woman herself. This had immediate ramifications for countless people including Chicago’s Jane Collective, a group of feminist activists who were providing free and low-cost illegal abortions out of an apartment and had recently been busted as well as the many thousands of women who were seeking illegal procedures and soon could receive safe, legal services.

McCorvey later wrote in the memoir I Am Roe that she didn’t understand the court case would take years; instead, she recalls that she agreed in part because she thought she would be able to get her abortion if the case prevailed. She had a third daughter in 1970, who was placed for adoption. Norma McCorvey would become a passionate pro-life advocate. Roe v Wade, even in its eroded state, unleashed a seismic change of identity for women in the United States.

For the first time, the power to give life or not give life—a heavy responsibility—was in their hands. The process of getting comfortable with this power set the stage for Carol Gilligan’s bestselling book In A Different Voice, which radically informed the next decade of the women’s movement.

Sarah Weddington, A Question of Choice (1992)