Shirley Anita St. Hill Chisholm (1924-2005) made history when she became the first African American woman elected to Congress in 1969; she served 7 terms, ending in 1983. And in 1972, she became The First Black Woman to Run for President on the Democratic Party ticket. She won 152 votes at the 1972 Democratic National Convention.

Born in Brooklyn, New York, Chisholm’s parents were from the Caribbean—her father was from Guyana, and her mother was from Barbados. She attended Girls’ High School in the Bedford-Stuyvesant neighborhood in Brooklyn; she earned her B.A. from the City University of New York’s Brooklyn College, and an M.A. in early childhood education from Columbia University’s Teacher’s College. 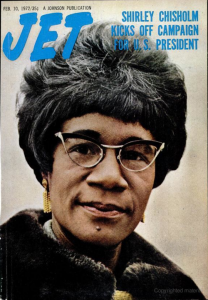 As a state representative, Chisholm was instrumental in securing unemployment benefits for domestic workers—like her mother—and she initiated SEEK (Search for Education Elevation and Knowledge) programs that created avenues for educationally disadvantaged students to attend New York state colleges.

In Congress, Chisholm delivered a speech to support the Equal Rights Amendment (ERA) that would render discrimination based on sex unconstitutional.

In her 1970 speech, she declared “artificial distinctions between persons must be wiped out of the law,” signaling the main principles of the women’s liberation movement of the 1970s, including congressional passage of the ERA (1972), the Supreme Court decision Roe v. Wade (1973), and a host of local and national victories for women’s rights.

The U.S. Postal Service honored her with a Forever stamp in 2014.

One thought on “The First Black Woman Presidential Candidate”