Commonly known as one of the leading Black abolitionists of the 19th century, Douglass also proved to be a staunch proponent of women’s rights. After escaping slavery in 1838, the Maryland-born activist quickly got to work, joining the abolitionist movement in 1841 and the fight for women’s suffrage just a few years later. 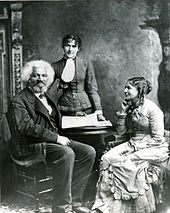 It was through his work with the Antislavery Society that he met Elizabeth M’Clintock and received an invitation to the women’s rights Seneca Falls Convention held in 1848.

He, along with famed suffragists Susan B. Anthony and Elizabeth Cady Stanton, in 1866 demanded universal suffrage with their American Equal Rights Association.

Get Involved: National Organization for Men Against Sexism

Douglass had long known that his liberty as a Black man was intrinsically bound to that of Black women. In fact, Douglass, dubbed a “women’s rights man,” wrote in his autobiography Life and Times of Frederick Douglass (1881) that “the cause of the slave has been peculiarly a women’s cause.”

Sojourner Truth’s 1851 speech, now famously known for her question, “Ain’t I a Woman?” exposed the intersectional blind spot of the women’s movement that privileged  whites.

Douglass boldly declared at the Equal Rights Association’s 1869 convention that the matter of Black enfranchisement was “a question of life and death.” 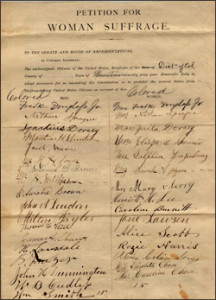 At the National Convention of Colored Freemen (1848), Douglass’ leadership as the organization’s president and chair he encouraged  officials to endorse “entire equality” in a resolution that most certainly included women of all races.

As women’s suffrage garnered attention, Douglass used his beloved North Star to make clear his stance, publishing an editorial that stated, “In respect to political rights, we hold woman to be justly entitled to all we claim for men.”

Whitney Hampson, A Historical Examination of the Split between Black Rights and Women’s Rights in the American Equal Rights Association, (2004).